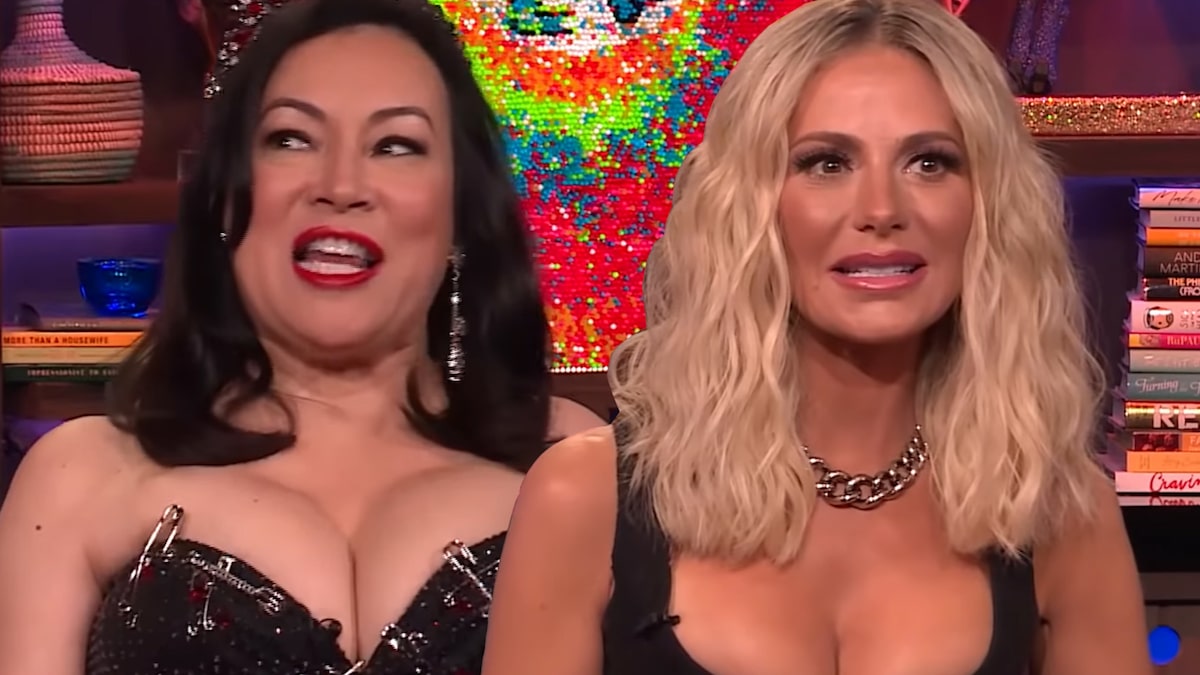 See why Tilly called Kyle Richards an “instigator” and how honest they both felt Erika was being all season long.

Dorit Kemsley and Jennifer Tilly both stopped by the “Watch What Happens Live” Clubhouse on Wednesday night — and the “Real Housewives of Beverly Hills” questions came at them hard and fast from Andy Cohen all episode.

While Dorit is, of course, one of the stars of the show, the “Chucky” star is in the know on all things RHOBH because she’s also best friends with Sutton Stracke. And you better believe she had her back when it came to Sutton’s season-long feud with Erika Jayne.

First, Andy brought up some of Erika’s issues with Dorit … or, more specifically, her husband PK. During the season, Dorit and PK — as well as Kyle Richards and Mauricio Umansky — got quite a laugh about Tom Girardi’s car accident, as they joked about how Erika’s version of events didn’t exactly make sense. Cohen asked if Dorit was laughing because Erika’s story was “ridiculous” or because she was “uncomfortable” with the direction the conversation went.

“Probably a little bit of both,” she began, “but I think it was more that, in an effort to try and recount the story, I kept sounding ridiculous and it was getting twisted and of course my husband is so funny, so we just start laughing.”

Even Andy called Erika’s story “fantastical,” before bringing up how Erika was clearly “displeased” after watching the episode unfold — expressing her disappointment on social media at the time. When asked whether her reaction made him feel bad, PK — who was in the audience — said, “No, because she’s been displeased with me before.”

Tilly was then asked whether she admired Sutton’s “sleuthing skills” all season, constantly peppering Erika with questions about things she didn’t think lined up.

“I have to say, I’m a huge Housewives fan and it’s a lot more fun to watch when your friend isn’t always on the hot plate,” she joked. “I don’t think she took it too far. I think she was asking questions she wanted to know the answer to and she was very brave I thought.”

Later in the show, Andy brought up a fan question and asked Dorit why nobody in the cast called out Kyle for “instigating fights” between Erika and Sutton.

“I think Kyle instigates fights!” she shouted. “Yes, she does. She’s like, let’s get interesting here!”

With the first trailer for the four-part reunion dropping on Wednesday, Cohen also had to ask Dorit for her thoughts on how it all went.

“So intense,” said Kemsley, who added that they all went into it knowing “it would be challenging and not easy” for Andy.

“It was intense to be there, it was intense to watch,” she added. “Not a lot of people could do what Erika did by showing up and answering the questions that she did and she answered every question, there were some tough questions.”

Tilly also revealed she was “getting phone calls from Lake Tahoe” from Sutton during her dustup with Crystal Kung-Minkoff at the beginning of the season.

“I was like, ‘Calm down Sutton, what’s going on?’” she recalled. “I think part of the problem was you got all these people who don’t know each other and they’re in a very tight area.”

She added that, while she first thought, “How dare [Crystal] go after my friend?”, once she finally met her at a party, she changed her mind. “I was like, ‘She’s really nice, she’s so cute!’”

RHOBH airs Wednesdays on Bravo, while “Chucky” premieres October 12 on SyFy and USA.