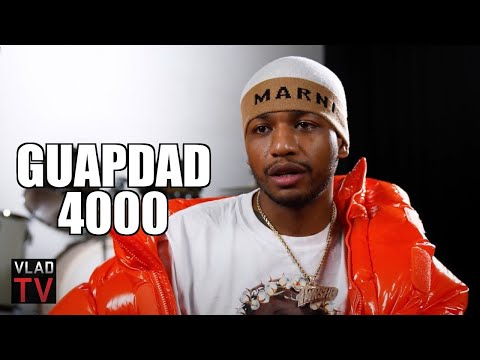 Part 6: https://youtu.be/yLMXlhOBPSU
Part 1: https://youtu.be/HtWId4B5Keg
——–
In this clip, Guapdad 4000 detailed getting head in his video for “Flossy” and putting out a casting call that got 187 respondents. He recounted how people reacted to the video and the boost he received from Drake posting it. The rapper gave his take on the war in Ukraine and how difficult it is for him to care about world issues because society as a whole has been desensitized to war, poverty, and violence.

He spoke about the making of “Black Iverson” and how it’s an homage to AI that highlighted Iverson’s status as a fashion icon. He said leaving “Black” in the title was also a friendly dig at Post Malone. Later, Guapdad spoke about Gunna and the contention over “Pushin P” and its origins. Guapdad said the phrase originated in the Bay but like much of what they invent culturally, they failed to capitalize on it.

In this clip, Guapdad 4000 discusses his love for anime and reveals that he would love to create his own someday, but won’t unless he has a proper budget in place in order to bring his vision to life. As the interview moves along, the Bay Area rapper shares that he has already begun doing voice-over work and that he is developed a short film for Amazon called “Stoop Kid.” Which is named after a character from a 90s cartoon called “Hey Arnold.” Moving along, Guapdad talks about his role in Issa Rae’s upcoming series on HBO called “Rap Sh*t.” He also explains the background for his new EP, “Handsome.” Lastly, the 29-year-old shares why he has managed to remain positive and the way in which he has subtracted negativity from his life.