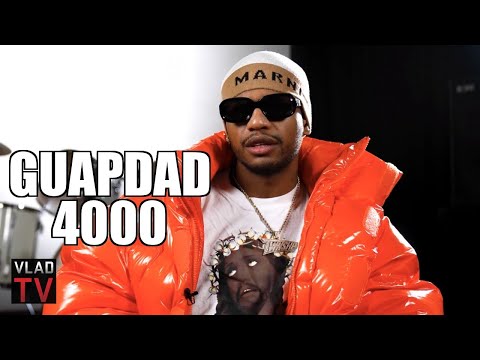 Watch the full interview now as a VladTV Youtube Member – https://www.youtube.com/channel/UCg7lal8IC-xPyKfgH4rdUcA/join
(iPhone Youtube App users click this link: https://www.vladtv.com/join )
——–
In this clip, Guapdad 4000 opened up to Shirley Ju about growing up in Oakland with his mother, who had him at 13 and also raised his two other siblings as a single mother. Guapdad 4000 then shared his thoughts on fellow Oakland rapper Too Short, who he says is a legend with “God-tier accomplishment.” Guapdad 4000 then explained that he was inspired by Too Short building a successful career independently, which he’s also done. To hear more, including Guapdad’s experience with labels, hit the above clip.

Moving along, Guapdad 4000 opened up about different times in his life he’s fallen in love with hip-hop, and how music is intertwined throughout his life. He then went on to speak about Jay-Z’s “Lost One” being a big song in his life, as his uncle used to play it all the time. Guapdad 4000 then recalled meeting Beyoncé, who introduced Jay Z as “my husband.” From there, Guapdad 4000 addressed the pimp culture in the Bay Area, including participating at one point in his life, which you can hear more about above.