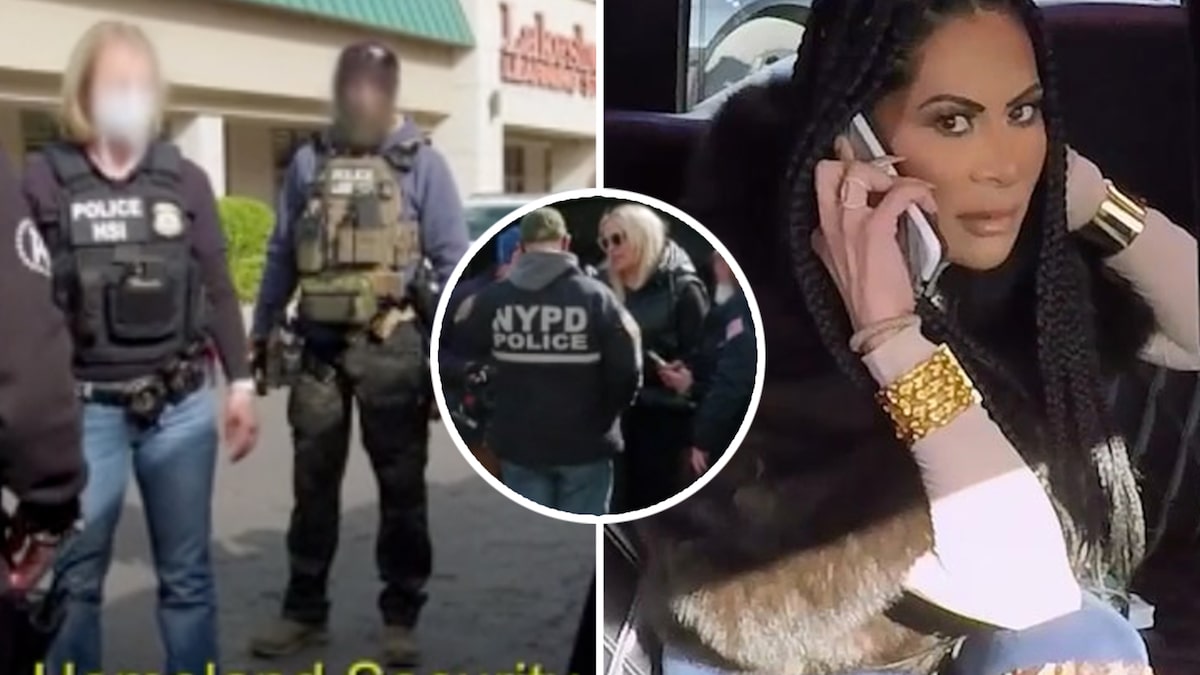 “There’s police and they have handcuffs out,” said one producer, as authorities rolled up on scene and said, “We’re looking for Jen Shah.”

Yes, the government finally came for Jen Shah — and cameras were rolling when Homeland Security, local police and the NYPD pulled up to arrest her before all the women left on a group trip to Vail, Colorado. But when they arrived, Shah was nowhere to be found.

On Sunday’s new supersized episode, Jen, Heather Gay, Lisa Barlow, Whitney Rose and Jennie Nguyen were all about to head to Vail — where they’d meet Meredith Marks and Mary Cosby — aboard a party bus, when Shah got a phone call.

Some of this footage was shared online earlier this season — though a lot of the good stuff wasn’t initially posted.

“I need to go to the house?” she asked, while looking straight into one of the the cameras on board. She then put him on hold and asked Whitney to pull off her microphone, before stepping off the bus. When she hung up, something was clearly off.

“I have some bad news. I just got a phone call and Sharrieff Sr.’s in the hospital, he has internal bleeding, so I need to go. He said, ‘Are you still in Salt Lake? And I said, ‘Yeah, we’re still here,’” she told Heather. “I need to go up there and see what’s going on. He had an appointment, he had internal bleeding. They’re not sure if they need to do surgery. I don’t really know what’s going on.”

She then went back on the bus and told her other costars the same story, repeating the “internal bleeding” claim, before telling them they could head out without her. When asked whether she was going to be okay, she told Lisa, “Yeah, I just gotta go figure out what’s going on.” With that, she was outta there.

As the women were debating whether they should wait for Jen or not, the feds made that decision for them. 12 minutes after Shah left the scene, a group of authorities including Homeland Security, and the NYPD rolled onto the scene asking if anyone in production knew where Shah was.

“There’s police and they have handcuffs out,” said one producer, as an officer said, “We’re looking for Jen Shah.” They began asking what vehicle Shah left the scene in and how long ago she booked it, as the four women on the bus looked on in disbelief. “Is this a prank?” asked Whitney, who was sure Jen was simply pulling a fast one on them as more authorities pulled up.

“What the f— is going on?” asked Lisa, as Heather exclaimed, “I’m freaking out.”

Gay then got out of the bus and asked the group what was going on. “We have to just talk to her, to make sure she’s okay,” one of the officers told her. A producer told authorities, “As far as we know, her husband’s in the hospital,” before Heather added, “She left here, she was on the phone, she left here, she got in the car, took her bag, said her husband had internal bleeding and she was heading straight to the hospital and she didn’t want us to stay with her.”

A producer then asked whether this was something they should all be “concerned” about, as a police officer said they just wanted to make sure she was okay and talk to her. “This feels like SWAT team,” said Heather.

“Something’s weird,” Barlow noted inside the bus, as Whitney recalled Jen asking to have her mic removed. “It’s not about Sharrieff,” said Lisa, as Heather got back on the bus. The women started calling their husbands and Jen’s assistant, Stu, before Gay asked, “Should I just call Jen and tell her that they just came her?”

“Um, I don’t think you should,” Lisa wisely told her. The episode ended with a “To be continued” and Heather asking, “What if she’s on the run?!”

The Bravolebrity was arrested in March, after she was accused of generating and selling “lead lists” of innocent people who could be targeted as part of a telemarketing scam for almost a decade. Many of the victims were elderly and working class. She pled not guilty to conspiracy to commit wire fraud and conspiracy to commit money laundering charges in April. All of this is sure to unfold on the show in the episodes ahead.

While Jen was pretty quiet on social media as the episode aired, Heather was live-tweeting along with the show.

I mean I jumped out of the bus to introduce myself… 😆

I know!!!😩 They said all they wanted was to make sure she was ok and I believed them.

A question I never thought I’d ask in the parking lot of @beautylablaser : What does HSI stand for?? 😩 #rhoslc

Who called the Po-Po? #rhoslc

Meredith Marks had a few choice reaction tweets of her own:

It would have been lonely In vail #RHOSLC

Barlow, meanwhile, appeared on “Watch What Happens Live” after the episode — breaking down to Andy Cohen what went down with law enforcement swarmed the bus.

“I don’t even know why,” she continued when asked why she advised Heather against calling Jen. “My first instinct was let her go. I wouldn’t do it. I was very resolute when I said it, for sure.”

She confirmed Whitney thought the officers were strippers, while Barlow added she initially thought they were there for Heather, since they were outside her Beauty Lab business.

Andy, meanwhile, promised that the next episode will be “Top 5 of maybe any Housewives episode I’ve ever seen” — so, stay tuned!