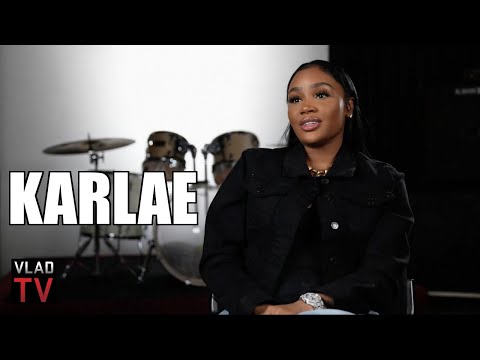 Part 5: https://youtu.be/sSxj6hWpXuw
Part 1: https://youtu.be/qUfZGiwt8Go
——–
In this clip, Karlae started off addressing rumors that Young Thug was dating Mariah the Scientist, which she revealed would be clarified on her upcoming album. Karlae then went on to speak about her dating life, as she revealed that she’s focusing more on herself right now, despite getting a lot of attention. During the conversation, Karlae also spoke about holding onto her song with the City Girls and Trina, and she also detailed collaborating with Coi Leray on “I Like.”

Moving along, Karlae talked about some of her favorite artists to listen to at the moment such as 2pac, Latto, Beyonce, Aaliyah, and Jeezy. She also reveals that her dream collaborations are Rihanna and Drake. Then, “Jimmy Choo” rapper declares that her short-term goals are to release new music, polish her brand and perhaps learn how to play the piano. Later in the conversation, Karlae shares an interesting story about a time that Machine Gun Kelly took her skiing, along with Young Thug.