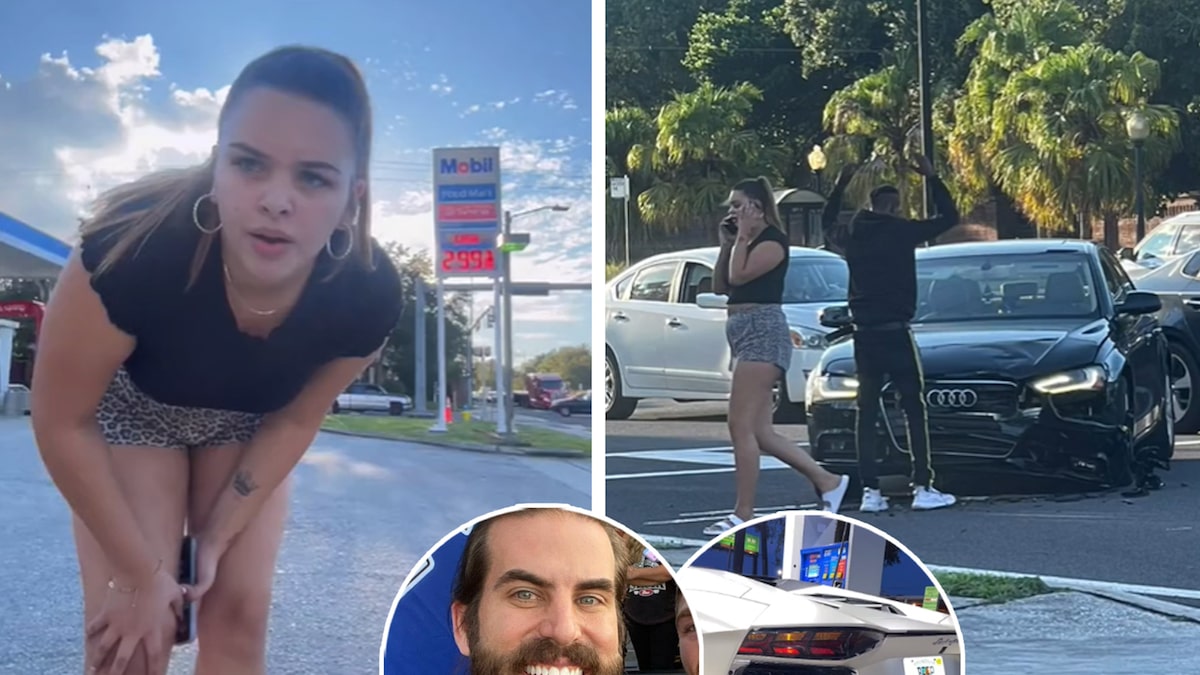 There are two sideswipes to every story.

TooFab spoke to Heller, as well as Gilsoul’s boyfriend Tashawn Thurman — who was in the car at the time of the accident — and it seems the two stories diverge even further.

According to Heller, he didn’t side swipe her, as he claims she hit him both times … and he didn’t even realize she’d done it the first time.

Per Heller’s timeline, both cars were waiting behind a third blue sedan, all waiting to turn left. At a green light, Heller beeped the first blue car to move up into the intersection — but he believes Gilsoul thought he was beeping at her and she purposely refused to move, blocking him.

He said that when he overtook her — into oncoming traffic — she moved forward to try and block him again, which is when, unbeknownst to him at the time, her front tires rubbed the side of his car; he said he didn’t even realize the cars had made contact.

He claims the “damage” to the side of his car shown in Gilsoul’s pics was just tire marks, that almost completely wiped off afterward: 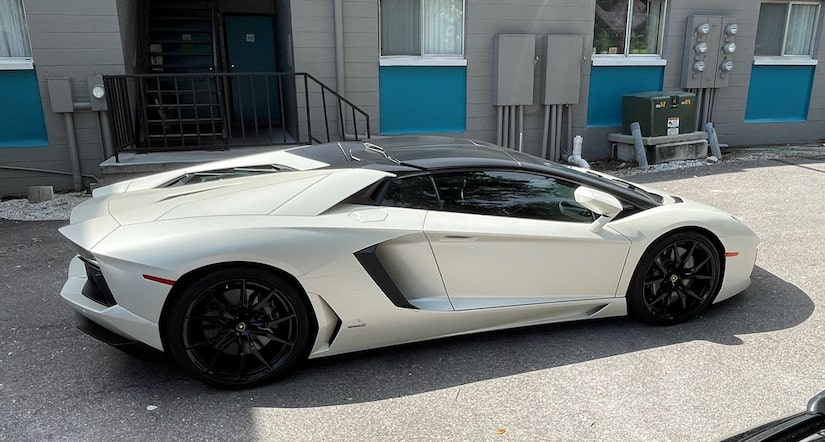 He says the reason he was so frivolous in the video — which he says he started recording for his own safety, as he saw Gilsoul and her boyfriend approach — was because he didn’t know the cars had come into contact beforehand, and he thought she was trying to blame him for the rear-ending.

He also claims he saw the cyclist, believing they were illegally crossing the road as the light was still green for cars. He added that, perhaps, they felt it was safe to cross since the cars were all stopped. Heller also claims the camera angle makes it look like the cyclist was a lot closer than he really was.

He also obtained a Nest camera view, which he claims shows Gilsoul turn her wheels into him and move forward as he attempts to go around her:

He points out that the Audi also moves forward as the cyclist crosses.

He also said that Gilsoul appeared to admit in her own TikTok that she rammed the Lamborghini on purpose: 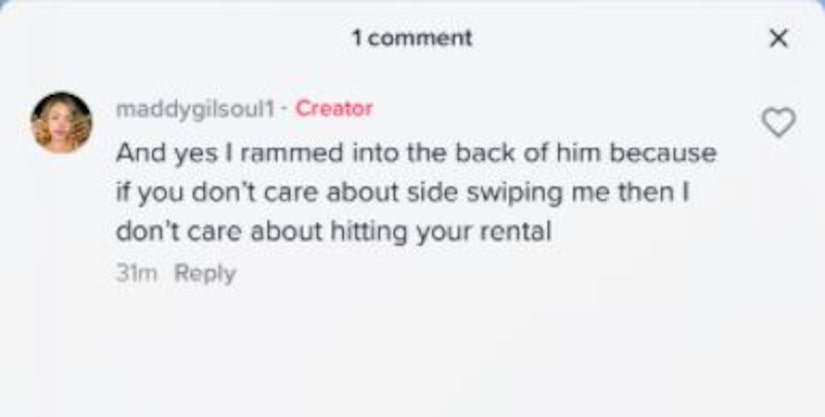 Heller also told TooFab he was actually on a first date at the time of the crash, and that the girl was “pretty shocked” by the ordeal. He claims that staff members at his company are getting harassed merely for having HornBlasters bumper stickers, and that his Google review score has plummeted as a result of the ordeal.

However, Gilsoul’s boyfriend claims that Heller orchestrated the whole thing, sideswiping them on purpose, knowing they’d follow, and jamming on the brakes to force them to rear-end him.

He rubbished Heller’s claim he didn’t know he’d made contact with the car, saying the impact was so great the Audi moved and even injured his knee, claiming that “a Lamborghini is much heavier than an Audi.”

Tampa police confirmed neither party was cited, though Thurman says Heller should have been. He also admitted his 19-year-old girlfriend did not have her driver’s license on her because police had taken it away from her at an earlier incident.

He said they have not yet found a lawyer who will take on the case, but neither is interested in the fame or money, although his girlfriend “wouldn’t mind some of the money [Heller] made off her from those 40 million TikTok views.”

He claims Gilsoul has been suicidal and is considering leaving her job from all the threats she has received online.

Everyone had a good laugh at the “crazy” lady blaming a Lamborghini driver after she rear-ended him … but it looks like the last laugh might be hers.

The bizarre encounter went viral this week after Matt Heller, the founder of car accessory site Hornblasters, posted a video of what seemed like an unhinged woman freaking out at him — after she ran into the back of his $400k+ supercar.

However, it turns out she wasn’t blaming him for that crash … but an unseen one seconds earlier where he allegedly ran into her. 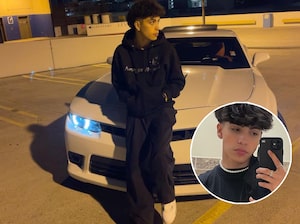 The strange saga began on Monday, when Heller posted pictures of his wrecked Lambo, along with video of what happened … or at least, some of the video.

It shows Gilsoul storming across a gas station parking lot to confront Heller, her Audi with a crushed fender left in traffic behind her:

“You hit my car!” she says, banging on his window. “You did that to the front of my f–king car!”

“Uh, usually when you rear end somebody, that’s not how this works,” he tells her. “It’s okay though, I’m gonna call the cops real quick … but yeah, you’re saying I hit you from behind?”

“No you hit me in the front of it. Remember, when I was at a red light, you went in front of me and hit my car!” she claimed. “Oh yeah?” he continues to giggle at her, “Okay, that’s cool.” 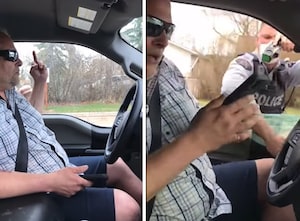 Heller’s clip, which has more than 40 million views, then cuts to a witness showing him cellphone footage which certainly appears to show Maddy’s black Audi turning left and running into the back of his white Lamborghini.

But what Heller’s clip doesn’t show is what happened right before that — where he appeared to sideswipe her first.

On Tuesday, Maddy posted her own receipts: a video shot just seconds beforehand, showing her black Audi waiting to turn left, with the white Lamborghini behind her. The Lambo quickly overtakes her — narrowly missing a cyclist in the process:

“Matt Heller went into oncoming traffic on a red light because I didn’t turn left on yellow,” Maddy claimed. “At that, almost hit a person. My lawyers will be serving him with slander.”

She also shared photographs of the Lamborghini after the crash, with scour marks all along its right side — which were probably not caused by it being rear-ended.

“Guess he didn’t wat to tell the whole story,” she added. “goodbye to your reputation Matt I will be suing for defamation and slander.”

Maddy’s TikTok comments were filled with people apologizing for making judgement on the first video, without seeing the whole story.

“I’m so sorry this guy decided to gaslight you on here. I’m sorry for believing him without hearing your side too. I hope this all works out,” one wrote.

“I just saw the full security cam. Where lambo almost kills some biker. I’m here to apologize for blaming you without you side,” added another

“Girl! I’m here to apologize to you as a grown female. I judged. I did. I was wrong. Clean him out girl! His cackle makes me livid now!” said a third.

A fourth added: “Wow the guys laugh seems so much more psychotic now… he really knew what he was doin.”

Some said Maddy was still in the wrong for rear-ending him, even classing it as road rage; but more still defended her, claiming they too would have tried to follow a hit and run car, and that she hit him by accident while trying to catch up.

As for Maddy herself, she had one final question: “why does your insurance say you drive a Volkswagen sweetheart?” 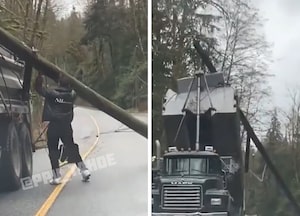