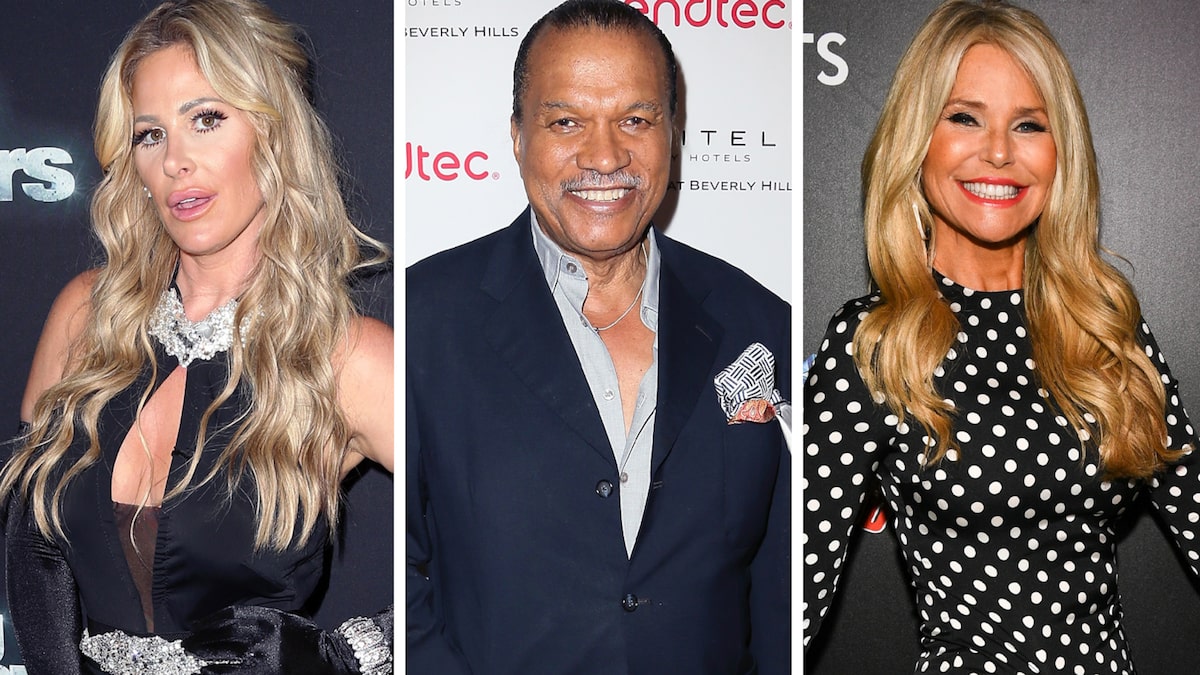 Mini strokes, broken bones and divorce all played a role in the exits of these stars.

“Dancing With The Stars” may seem like it’s just sequins and smiles but behind the scenes, it’s a tough competition.

The celebrities that take part in the show are often pushed to their mental and physical limits as they learn to dance alongside the professionals. Unfortunately for some, the show proves to be too intense and they’re forced to quit — sometimes before they ever make it to the live tapings.

While most of these stars end up devastated they have to back out, it’s always a matter of keeping everyone safe and healthy. But with any luck, they’ll be invited back to give it another shot!

Find out which stars had to leave “Dancing With The Stars.”

During Kim Zolciak-Biermann’s time on “Dancing With The Stars,” she unfortunately suffered a mini stroke while she was visiting home. Several days later, she was discharged from the hospital and continued training with her partner. Unfortunately, doctors did not clear her to fly back to Los Angeles and she was forced to withdraw from the competition against her will. Kim explained that she had hoped to return the following week but the show’s rigid rules did not allow her to skip a week.

“[I feel] really great…I rehearsed on Saturday, I learned that whole dance…and then my doctor told me yesterday that it’s just too soon to fly, that I could go next week but I just couldn’t go today, so I’m really sad,” Kim said on air.

Christie Brinkley had to drop out of “DWTS” before the competition even began. In the weeks leading up to the show, Christie broke her arm during practice, which required surgery to her wrist and arm. Thankfully, Christie’s daughter Sailor was able to step in to replace her on the reality show.

“I just broke my arm into a 1000 pieces requiring surgery with a metal plate and screws to hold my arm together … I’m so sorry! Only something like that could stop me from continuing to dance with my wonderful coach … I was having a blast! It was quite literally a crushing disappointment, I never ever want to let anyone down, so I looked for a silver lining and I think this one is solid gold!” Christie wrote on Instagram at the time.

While competing on the show in 2020, Jeannie was forced to withdraw after being diagnosed with epiglottis, a condition which causes swelling and blocks airflow to the lungs. After leaving the show, she underwent surgery for the potentially life-threatening health issue.

“It saddens me that I will not be able to continue with the competition on DWTS. My doctors discovered a health concern with my throat which requires immediate attention and surgery. I am heartbroken that my DWTS journey has to end here. The last several weeks have been an amazing learning experience. I have pushed myself to new limits physically and mentally, and I am so proud of how far we’ve come,” Jeannie said in a statement.

Billy Dee Williams was one of the oldest contestants to ever partake in “DWTS” but after a rigorous training experience and first week of competition, he had to withdraw due to his battle with chronic back pain.

“I’ve had a wonderful, brilliant, fantastic blast of a time … Pure joy. And I want to thank every one of you folks for your support,” he said on the show.

Jewel didn’t make it to the first week of competition before having to quit the show. During rehearsal she revealed that she had been suffering from tendonitis in her knees and things got even worse when she fractured the tibia in both of her legs. She was forced to withdraw once doctors told her that she shouldn’t even be walking, let alone dancing. Thankfully she was still able to attend the show to cheer on her husband Ty Murray who was also taking part in the competition.

“When the doctors told me my injuries were so severe that I couldn’t walk, let alone compete, I was devastated that I couldn’t continue the show. I have every intention of being at ‘Dancing With the Stars’ this season supporting my husband, Ty (Murray), and his partner Chelsie. I hope to be back on the show in the future,” she explained.

Tamar Braxton was nine weeks into the competition when she was hospitalized for what she expected to be pneumonia. She left the hospital in order to compete and then swiftly returned after the show wrapped. Unfortunately, her condition was much worse than what she thought and she was actually suffering from blood clots in her lungs. She was then forced to take a step back from the show.

“After yesterday’s final #dwts performance I went back to the hospital (after the doctors didn’t want me to leave in the first place) only to find out that I don’t have pneumonia but something way more serious and that is having several P.E.’s (blood clots in both sides of my lungs). As you all know I will be the first to always encourage anyone to push through any obstacle that comes along one’s way. But in this case, my health is my current obstacle,” Tamar wrote in a now-deleted Instagram post.

Former NFL player Ray Lewis had to exit “DWTS” after an old foot injury resurfaced that left him with three torn tendons in his foot. When he was told he would need surgery, Ray decided he could not continue with the competition.

“Not the ending I had hoped or worked for but that mirror ball wasn’t in the plans for me. I can’t say thank you enough for the support and love. Injuries have never stopped me before and certainly not now. I’ll be back doing the squirrel dance soon enough,” Ray wrote on Instagram.

Dorothy Hamill had only taken part in two dances when she had to withdraw from “Dancing With The Stars.” Unfortunately, the retired Olympic ice skater suffered a severe back injury that made it difficult to continue. Dorothy chose to eliminate herself before anyone else could be sent home.

“I’ve taken the advice of my spine surgeon, and I need to withdraw from the competition. I have an injury that could be irreparable, and nerve damage. It would be completely unfair for me to stay in this and have any of these people go home … These are the most amazing people who want to be here. It’s not that I don’t want to be here, but I wish I could give it my all, but I can’t,” Dorothy said on air.

Country singer Sara Evans was in the fifth week of competition when she unexpectedly quit the show for personal reasons. Although she didn’t explain what was going on at the time, days after her departure, she filed for divorce from her ex-husband Craig Schelske. Looking back, Sara says the show was an amazing experience, but she knew she had to be with her family at the time.

“‘Dancing with the Stars’ was the most amazing experience of my life. Tony Dovolani was my partner and I had so much fun … Unfortunately, I started going through a divorce in the middle of ‘Dancing With the Stars’ and something traumatic happened. We were set to go do the group dance the next day, and I was going to have to leave the kids and be gone for like 15 hours a day and I just couldn’t do that. I knew that the kids needed me, so I had to quit,” Sara said on “The Talk.”

Nancy O’Dell had to withdraw from “DWTS” right before the premiere after tearing the meniscus in her knee in two places. The injury, which she says her doctor described as “significant,” required surgery which would have taken eight weeks to recover from.

“Beyond disappointment doesn’t even begin to describe how I feel about not being able to continue on ‘Dancing With the Stars.’ It has been one of my favorite shows since season one … I’ll miss working with my partner, Tony Dovolani, and all the other wonderful people on the amazing production that is ‘Dancing With the Stars.’ Tony has been an amazing teacher and dance partner and I feel horrible I can’t continue for him … Although short, it was a great experience. I challenged myself to take risks at doing something I had never done before!” Nancy said in a statement.

Misty May-Treanor was still an active professional beach volleyball player when she signed up for “DWTS.” During the fourth week of competition, she unfortunately tore her Achilles tendon during a rehearsal. When she discovered that repairing the injury would require surgery and a nine-month rehabilitation, she knew she had to exit the show.

“I ruptured my Achilles tendon and from that point on I knew I couldn’t continue. I’m out and I’m really bummed. We don’t know why these things happen. They could happen to anyone. I feel like I was only just beginning here,” Misty told People.