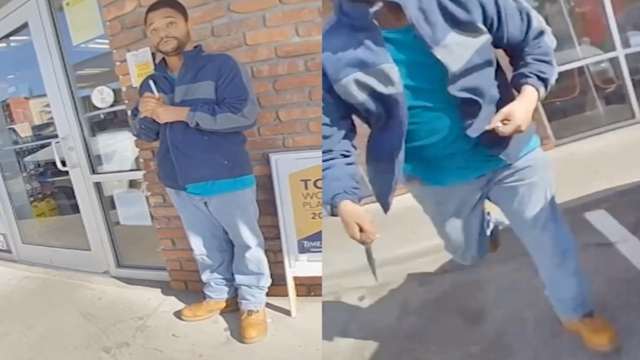 The New York Attorney General Letitia James released police body-camera footage from the fatal shooting of 33-year-old Joshua De’Miguel Kavota by a Saranac Lake Village Police officer. On the morning of June 29th Saranac Lake police officers responded to reports of a stabbing at a local Stewart’s Shop. The footage, taken from the bodycam on Saranac Lake police Officer Gabrielle Beebe, shows Beebe and her partner approach Kavota outside the Stewart’s Shop. In the video, Beebe repeatedly asks Kavota to hand over a knife. Kavota refuses and says, “I would be careful what you wish…”.

After the brief exchange between Beebe and Kavota, the video shows Kavota take the knife out of his pocket and charge at Beebe, who screamed and stumbled backward. Beebe fell backward and, within a few seconds, it appears that her partner, Officer Aaron Sharlow, fired off two rounds from his gun at Kavota, who then fell to the parking lot. Beebe is heard sobbing as she catches her breath. She took her gun out and pointed it in Kavota’s direction. The knife appeared to be a fixed-blade kitchen knife with a wooden handle. The footage shows the knife on the ground at Beebe’s feet.

Seconds later, Kavota can be seen lying on the pavement, before both officers attempt to administer first aid. Later in the video, Officer Sharlow says he shot Kavota two times in the chest during the attack. An ambulance arrives a short time later, after which the video ends. Kavota was later pronounced dead after being transported to Adirondack Medical Center. Both officers have been placed on administrative leave during the investigation. No further information as to the findings of the investigation has been released.