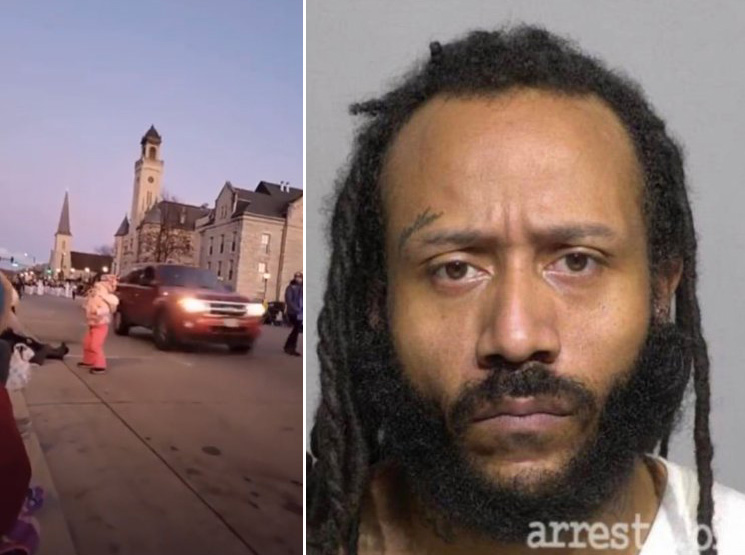 At least 5 people were killed and dozens more injured when a vehicle rammed police barriers and plowed into a Christmas parade in Waukesha, Wisconsin on Sunday.

An officer opened fire on the speeding vehicle after the suspect broke through police barriers to flee the scene.

BREAKING: First video of a red Ford Escape breaking through barriers after mowing down parade goers and firing rifle into crowd in Waukesha, WI pic.twitter.com/QHDi2fsKDz

Chilling videos showed bodies flying as the red Ford Escape SUV mowed down children, high school cheerleaders and dancing grannies. The suspect was reportedly fleeing police after leaving the scene of a stabbing.

He is an admitted child sex trafficker. pic.twitter.com/h1O7Ef8Xr6

Brooks faces multiple counts of capital murder, reckless endangerment, fleeing the scene of a felony, possession of a firearm by a felon, and many more charges.

According to court records, Brooks was released on $1,000 bond just two days before the tragedy. He has a long criminal history that includes domestic abuse and sex trafficking charges.

In addition to being a career criminal, Brooks is an aspiring rapper who uploaded tracks to YouTube and SoundCloud calling himself Mathboi Fly.

Yes this is Darrell Brooks aka Mathboi Fly rapping with a gun in front the same vehicle used in a mass homicide. Case closed I’d say#Waukesha#waukeshaChristmasParade@FoxNews @benshapiro @cnn pic.twitter.com/zVbZbFsbOU

According to posts on his Facebook page, Brooks was unhappy that 18-year-old Kyle Rittenhouse was found not guilty on all charges by a Kenosha, Wisconsin jury on Friday.

Facebook took down Mathboi Fly’s page hours after the incident.

Footage of the attack in downtown #Waukesha during the Christmas parade.

A man saves a child from being struck.

To all the helpers in #Waukesha right now, our love and respect. This will undoubtedly be a very long night for the families & the medical teams. Keep them close in your thoughts. pic.twitter.com/wmQEoCudSV

#Waukesha We DO NOT KNOW the motive of the attacker to determine if the attack was #Terrorism. ALL WE KNOW is a vehicle has been deliberately used as a weapon system. Let’s hold our opinions on the nature of the attack until we get more data.

The man in custody over the mass casualty incident at the #Waukesha, Wis. Christmas parade has posts on his social media in support of BLM causes, George Floyd & black nationalism. He also has a post about how to get away with running people over on the street.

If your first thought after a terrorist drives through a parade of children is the skin color of the murderer — then you’ve been successfully poisoned by the mainstream media. Seek help. #Waukesha