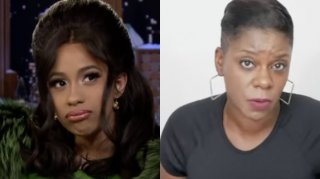 When it comes to hip-hop, journalists have been in the line of fire since day one. From Dr. Dre’s alleged assault of Dee Barnes to Eminem’s high-profile beef with Benzino at The Source, journalists are almost as likely to catch heat from a rapper as a rival emcee. This time around it appears as though Cardi B and Tasha K are the latest entry into the storied rivalry.

Cardi B won her federal libel case against Tasha K on Monday. During the case, the New York native simply referred the jurors to a series of videos that Tasha K posted online, alleging that Cardi B was a drug addict and a prostitute that had contracted an STI. In addition to providing the court with video/audio supporting evidence, Cardi B also testified.

After one week of deliberating in court, the judge and jurors sided against Tasha K, ordering the journalist and on-air-personality to pay Cardi B $1.25 million in general damages and $250 for medical expenses.

In Tasha K’s reaction to the verdict, she posted, “My Husband, Attorney’s, & I fought really hard. I want to thank them for their long hours and sleepless nights. Winos it’s only up from here. See y’all in a few days. Back to work.”