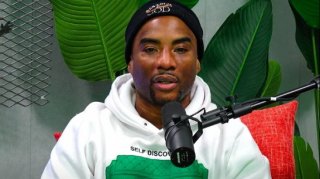 On the track “Eazy” by The Game featuring Ye, the Chicago native said “God saved me from that crash/Just so I can beat Pete Davidson’s a** (Who?)” Clearly, Ye isn’t feeling his ex moving on with the comedian but many thought the bar was beneath Ye while others, including Charlamagne, thought it was flat-out corny.

Around the 1hr 5min mark Charlamagne said, “I thought Kanye’s bar to Pete was corny as hell.”

He continued to say he was also unsettled by Ye’s comments about using backpack rappers in the past during his Drink Champs interview. “I think about what he said on Drink Champs when he said he used all the backpack rappers,” Charlamagne said. “And now he’s hanging out with all the street rappers now. He’s hanging out with them so he can say that line.”