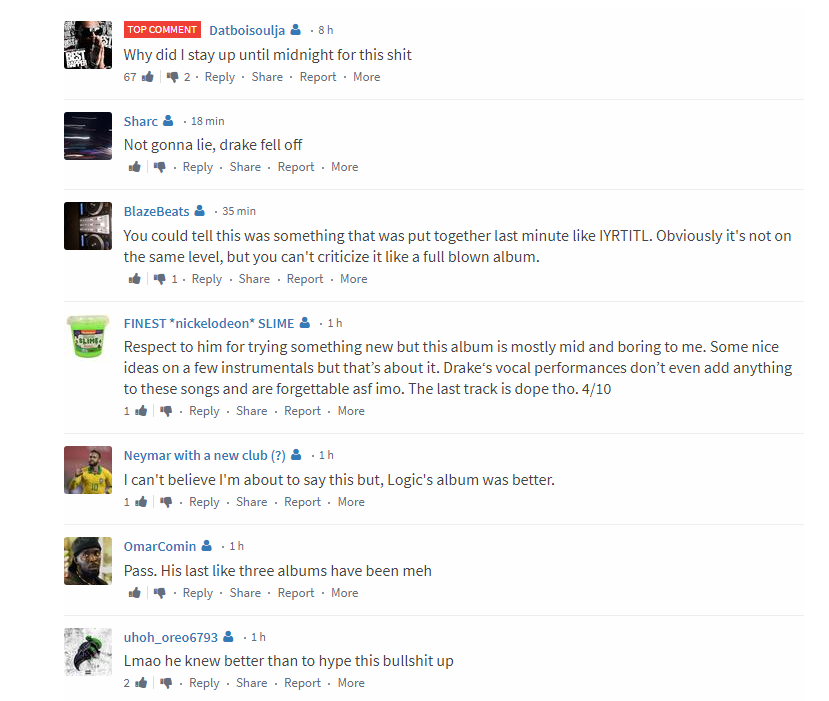 Drake has never shied away from being polarizing.

Drake has just released a brand new album called Honestly, Nevermind, and as always, fans have a lot to say about the new project. At this point, it should be a given that people are going to react in a polarizing fashion to Drake’s music. He is the biggest artist in the world and as a result, there are high expectations for each and every project.

With Honestly, Nevermind, in particular, the reactions have been extra negative, especially when it comes to the HotNewHipHop comments section. In this new project, Drake is offering up EDM and dancehall vibes, although it doesn’t seem to be resonating with everyone. Sure, there are some defenders but as you will see, the negativity is spreading like wildfire.

“Damn as a huge fan of drake this not his best album he can do better even logic album is better and i don’t listen to logic is hip hop is dead or n****s fallin off?” one commenter wrote. Another echoed those sentiments, saying “The quality of Drake‘s music has been going downhill ever since Views and everything is just filler or music that’s only played for 24hours.”

There were certainly some defenders of the album as one user penned a defense of Drake, saying “Everybody just hating on this album because its not hip hop. This is actually a fire album nice to hear something different.”

In between the defenses of the album was even more slander. For instance, remarks like “Lol the man named it Honestly, nevermind and because it’s Drake y’all thought it was just a title. It’s a warning,” and “I miss when Drake made quality music rather than poppy, cash grab shit like this..” were found all throughout the comments section.

It’s crystal clear that fans don’t know how to feel about the new sound that Drake is going with. To be fair, the album just came out and it could take a while for people to digest what they just heard. With that said, we could be in for an album that gets better with time, especially with the summer right on our doorstep.

Let us know your thoughts on Drake’s new sound, in the comments down below.