Kristin Evans is heard begging Stacy to stop as he picks her up and throws her around the room like a rag doll.

At 220 pounds the former NY Jets running back easily outweighs the mother of his 5-month-old son.

According to reports, Stacy flew into a blind rage while visiting his infant son at Evans’s Florida apartment around 2 p.m. on Saturday.

Stacy dragged Evans from a sofa and punched her several times before throwing her into a flat screen TV which landed on top of her.

The 30-year-old ex-NFL player then told his son, “I love you,” before storming out of the apartment. 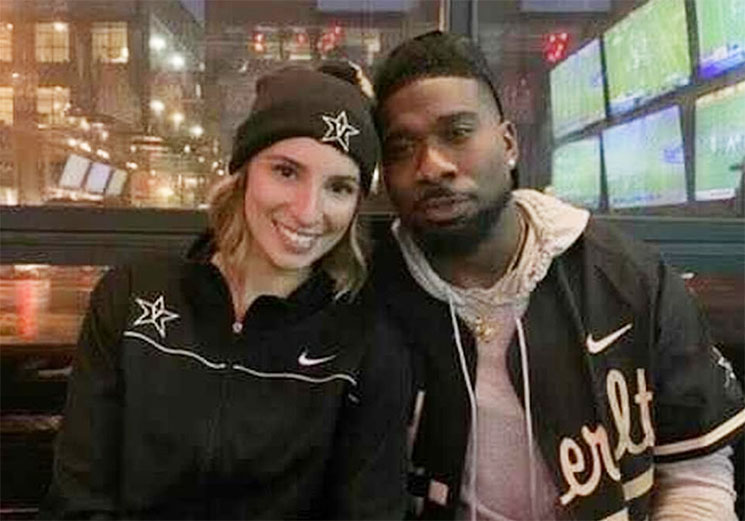 Evans and Stacy are pictured during happier times when they first met at Vanderbilt University.

Evans has filed a restraining order against Stacy, who is on the run from police. She believes he is in the Nashville area.

Evans says Stacy had time to flee because officers in Oakland, where she lives, didn’t take her complaints seriously.

“The Oakland PD officers that came to my house didn’t seem to think this was a bad enough incident to make an immediate arrest or to file for an immediate warrant,” she wrote on social media. “It took four days of me calling people and an Orange County officer speaking on my behalf.”

“The Florida justice system has been failing me. I have filed police reports previously and the State Attorney hasn’t picked them up. Other women fall victim to this everyday. Please call attention to the Florida State Attorney.”

She said the police viewed the same video you’re seeing — and they still took four days to issue an arrest warrant.

“No one should have to go through what I went through and then to have to fight for the law to protect them. It took 4 days to issue a warrant WITH VIDEO.”

Caution: The video below contains violence which may be disturbing to some viewers.