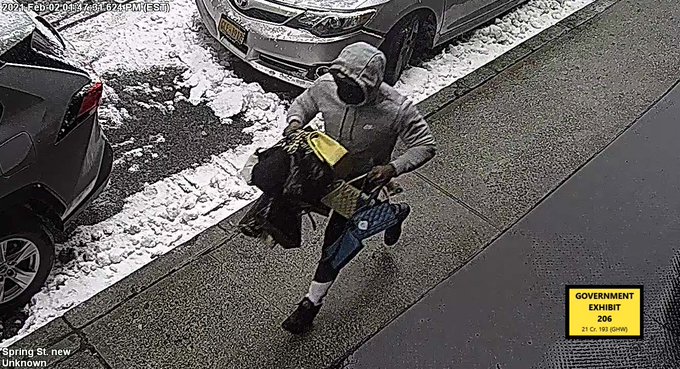 Eric Spencer, was convicted yesterday for his participation in a robbery of a luxury retail store in New York, New York on February 2, 2021. Spencer was convicted after a one-week jury trial before U.S. District Judge Gregory H. Woods.

As reflected in the Indictment, public filings, and the evidence presented at trial:

On February 2, 2021, Spencer robbed a Chanel store located in the SoHo neighborhood in Manhattan. Spencer and three other co-conspirators entered the store and began ripping handbags off the cables that secured them to store displays. When an armed security guard confronted Spencer, he reached into his waistband and intimated he had a firearm, causing store personnel to back off as the perpetrators made off with over $200,000 in luxury goods.

In the days after the robbery, Spencer took photos of the stolen bags on his phone, bragged on his social media account about acquiring so many bags he “COULD OPEN A SMALL BOUTIQUE,” and sent text messages confirming he had sold the stolen merchandise.

Spencer, 30, of Brooklyn, New York, was convicted by a jury of one count of conspiracy to commit Hobbs Act robbery and one count of Hobbs Act robbery. The maximum potential sentence for each count is 20 years in prison and is provided here for informational purposes only, as the sentencing of the defendant will be determined by the judge. Sentencing is scheduled before Judge Woods for June 30, 2022.