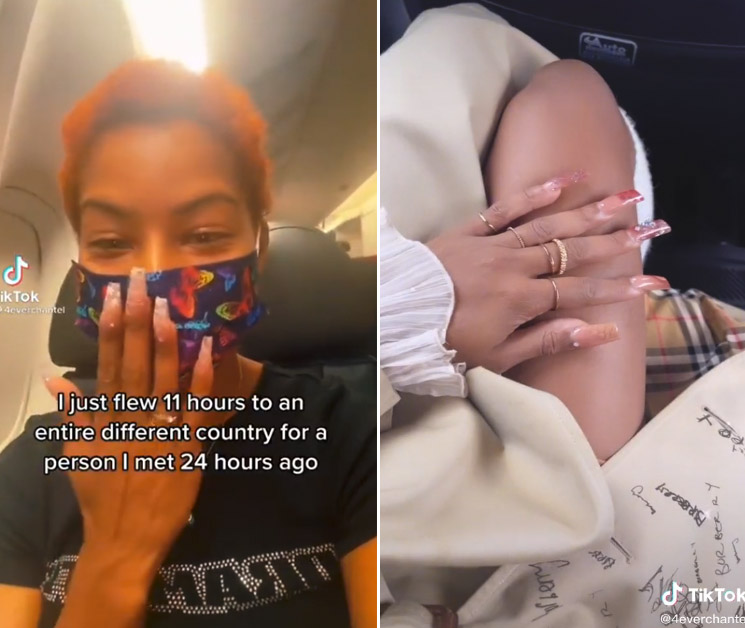 A TikTok user is going viral after she confessed she flew 11 hours to hook up with a guy she met online 24 hours before.

The woman, whose TikTok username is @4everchantel, shared videos that shows her meeting the guy who gave her flowers and took her on a shopping spree in London.

The original video was viewed over 1.3 million times.

Twitter users were not impressed. They agree that women are more willing to take risks for social media clicks and views.

One user wrote: “Serial Killers don’t even have to work hard anymore.”

Another person tweeted: “Y’all be desperate trying to disguise it as romance.”

And a third Twitter user wrote: “At least she’s documenting her journey … in case something does happen. I hope she’s safe, regardless of her lack of common sense lol.”

I think Men don’t have to put any effort anymore cause this the 5th women I see that SHE is the one who travel to see a man and not the opposite.

Because sadly, a person like her would never let someone fly out to see her. Not gonna go viral sitting at the house waiting.

I’m hella old and grown and my dad would never allow this lol. Neither would I wanna. Shoot I’m too scary ?

This is an open post where you can discuss any subject matter. This post will not be censored or moderated. Disqus may automatically moderate certain words considered offensive. There are no rules in Open Posts. So enter at your own risk.