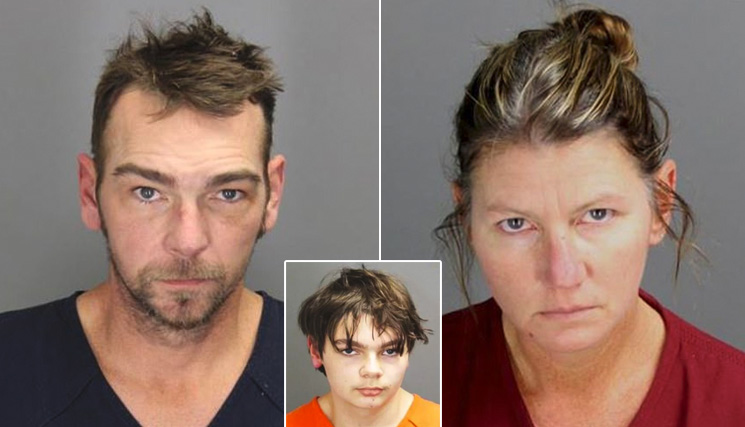 The fugitive parents of Michigan school shooter Ethan Crumbley were arrested early Saturday, hours after their attorney claimed they were on their way to turn themselves in to police.

James and Jennifer Crumbley face 4 counts each of involuntary manslaughter. Their son, Ethan, 15, is accused of killing 4 students and wounding seven others during a shooting rampage at Oxford High School on Tuesday.

The Crumbleys were taken into custody after Detroit police found the pair hiding in the basement of a building in Detroit, less than a mile from the Canadian border.

A tipster led police to the couple’s abandoned black Kia Seltos SUV near the building on the east side of Detroit.

The Crumbleys were booked into the Oakland County Jail without bail.

James Crumbley reportedly purchased a 9mm Sig Sauer handgun as a Christmas gift for Ethan on November 26. Ethan displayed the gun in photos on social media, along with terroristic threats.

Jennifer Crumbley allegedly texted Ethan “don’t do it” a day before the shooting.

School officials met with Ethan the morning of the shooting and sent an email to Jennifer about Ethan’s Internet searches for ammunition. She did not respond to the email.

Instead, Jennifer laughed and warned her son in a text message “learn not to get caught.”

Both James, 45, and Jennifer Crumbley, 43, have criminal histories. James should have failed a background check when he purchased the weapon.