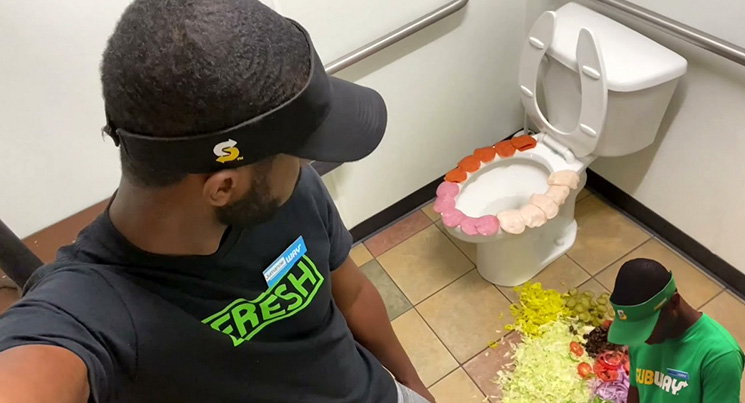 The Subway worker who was fired from a Providence, Rhode Island store for tampering with food now works at a Taco Bell restaurant.

The man who calls himself “Jumanne Struggled” on social media uploaded a video that shows him preparing tacos at a Rhode Island Taco Bell.

The man went viral on Friday after his videos were posted on Reddit.com’s R/awfuleverything sub.

In a video uploaded to YouTube on Oct. 14, the ex-Subway worker filmed himself walking on salad trays that he placed on the floor. He then placed the trays back on the counter to make sandwiches for customers.

In another video, he lines a toilet bowl rim with deli meats, then tosses salad, deli meats and bread on the floor.

In an interview with the Daily Mail, he admitted he trashed the food for TikTok and YouTube ad revenue:

“Unfortunately, I’m a content creator, so I create controversial videos to be able to potentially monetize my audience on YouTube and other social media platforms.”

He said he was concerned that he might be arrested but he noted that the rewards (Internet fame and money) outweighed the risks.

“I just reached a point where I decided I would be willing to take a higher risk for a higher reward. There’s a lot of consequences within creating controversy but I accept whatever happens.”

In a statement to Newsweek on Friday, a Subway spokesperson confirmed the man was immediately fired after the videos surfaced online.

“Subway and our network of franchisees take health and food safety extremely seriously and don’t condone any behavior that violates our strict policies in these areas.

“While Subway restaurants are individually owned and operated, we have confirmed with the franchisee of this location that the employee was immediately terminated after he learned of the employee’s actions.”