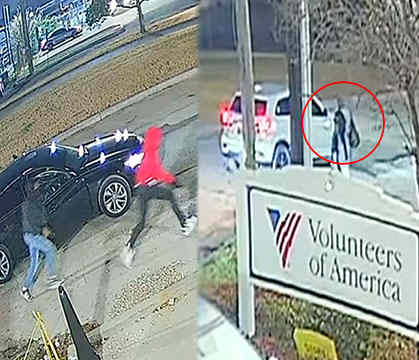 The New Orleans Police Department shared another video of a brazen shooting in the city, this time outside the Volunteers of America Facility on St. Anthony Avenue. According to the police department, the shooting happened around 5:22 a.m. Thursday as a man who lived at the facility was leaving the building. Video shared by the NOPD shows three suspects in hooded sweatshirts get out of a Honda sedan and open fire, striking the victim several times. After shooting the man, the three suspects get back into the sedan and drive away. The NOPD said the victim was taken to the hospital. A spokesperson for the VoA facility said the victim was waiting for a ride to work before the shooting happened. The video shows the suspects waiting inside the car outside the building for around 20 minutes before jumping out and shooting the man. Photos released by the police department on Thursday show three suspects. One of the photos shows one individual shooting a gun. The facility is a residential re-entry center where federal inmates who are nearing the completion of their sentences can transition back into society.