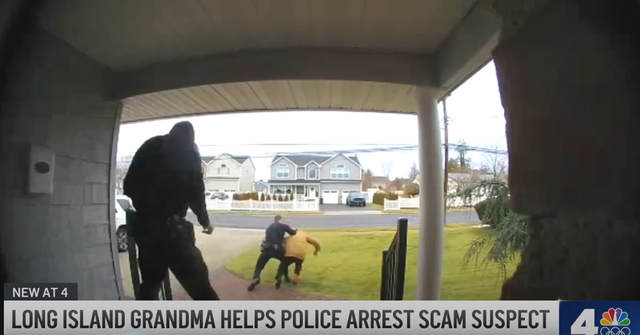 A 73-year-old woman from Long Island got some satisfying justice on a guy who was trying to rip her off. The grandmother of 7 who describes herself as a “bored grandmother from Seaford” alerted police after recieving a series of phonecalls saying her grandson needed $8,000 for bail after a car accident. She knew the calls were bogus and notified police of the situation.

When the man showed up to collect the money she handed him an envelope stuffed full of paper towells, and as he walked down her front stairs (probably smiling ear to ear), he was quickly tackled and arrested by local nasau police. Jean was formerly 911 dispatcher for over 20 years for the local police department. The police have also made another arrest in connection with the other cases.

Imagine thinking you’ve got some poor ‘ole granny on the hook for a big score and wind up getting your face planted in the dirt by local police because you got straight up played by said grandmother.