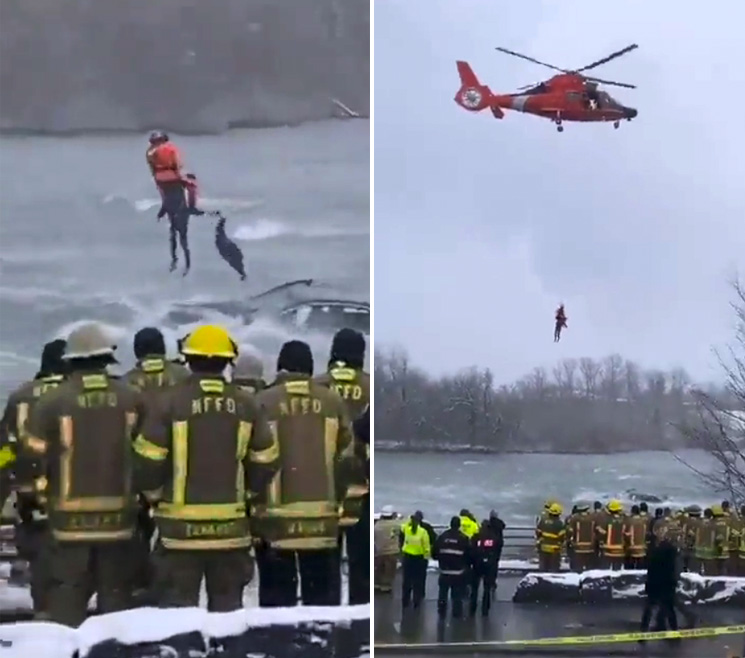 Police say a woman who was pulled from a submerged car in the Niagara River has died.

Dramatic footage shows a Coast Guard helicopter swimmer bravely pulling the woman from her submerged car as it floated near the edge of the Niagara Falls on Wednesday.

Police first sent a drone to see if anyone was in the car. Then a U.S. Coast Guard helicopter lowered Petty Officer 2nd Class Derrian Duryea down to the car.

Duryea had an axe in case he needed to break the window. He was spinning and swinging past the car but was able to grab onto the passenger side and open the car door.

“Luckily, the car was unlocked and I didn’t have to break out any windows and I was able to open up the passenger side door and push it up against the current,” he said.

After securing the woman, Duryea signaled to the chopper pilot to pull them up as the water churned around the car about 50 yards away from the falls.

“The current was ripping pretty good through there and the car was close to the edge of the falls. If it moved, we didn’t want him getting dragged out with it,” flight mechanic Jon Finnerty told Buffalo News.

Investigators say the woman, who was in her 60s, intentionally drove into the water.

“Entry into the water appears to be an intentional act,” New York State Park Police Capt. Christopher Rola said in an emailed statement to the Buffalo News.