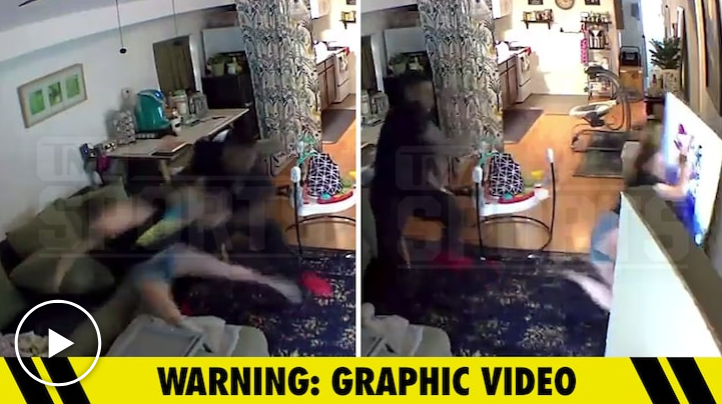 Former Jets running back Zac Stacy has been arrested and jailed after footage emerged showing him viciously attacking his ex-girlfriend as their son sat nearby.

The home surveillance footage shows Mr Stacy delivering a sustained and brutal attack on Kristin Evans, the mother of his child, punching and throwing her into furniture.

Mr Stacy was arrested by police in Orlando, Florida, on Thursday evening after Ms Evans pleaded for help in tracking him down.

According to an affidavit, the athlete faces two felony charges of aggravated battery and criminal mischief, If convicted, he could face up to 20 years in prison.

Police said Mr Stacy “struck [Evans] on the right side of her head, and picked her up and threw her against the television, causing it to crack and fall over.”

“He continued yelling at her and striking her while she got up from the floor, and picked her up again and threw her into the baby’s bouncy chair,” said arrest documents.

Ms Evans said in a restraining order filed on Monday that Mr Stacy had been abusing her since she was pregnant with their son, saying that the attacks were escalating and she was afraid “he will kill me.”

Photos released from an alleged incident in August show Ms Evan had multiple wounds after an argument about money.

“He physically assaulted me several times because he wanted the money back he gave me for our rent,” she wrote.

“He punched my legs, slapped me, picked me up by my arms, and threw me into my window, which broke. I had glass in my feet that I removed myself,” Ms Evans continued.

The National Down Syndrome Society also said they would not work with him as an ambassador again, saying in a statement they were “horrified by the video.”

Players across the National Football League were also quick to condemn the former player. Chris Long, an ex-teammate of Stacy with the Rams, wrote on Twitter: “Woke up to the Zac Stacy video. Made my stomach turn. Not retweeting. Crazy to play w[ith] someone for a couple years & you have no idea what kind of bulls–t they do at home.’”